It was inevitable! Stuart was sketching the boatman with his hand on the tiller. He wrote “our lives in his hands” on the sketch, only moments before the crash. Skilled though our boatman was, one wrong choice in the many thousands of choices he and his front boatman had to make during our trip, and we were on the rocks.

“One wrong decision, turn right instead of left. Fourteen people feel a thump as the boat bumps over an unseen rock, taking out the rudder and cracking the hull. Mercifully, as we collide with the inevitable boulder, the boat tips but is held by the current. Even better, this rock is connected to the shore. We scramble to safety as our boatman starts throwing our bags towards the bank. Some land in the water, and we rush to grab them, then start a chain operation to get them out of the boat safely. The only loss is a brand new camera that slips through six pairs of hands into the Mekong. For the next half an hour, minus its lens, it sits twitching on a rock, its electronics totally shot. We pass around the bottle of ‘Lao Lao’ (Mekong Black label local hooch sold in plastic bottles) to settle our nerves, and take stock of where we are. And what we are … Alive!” 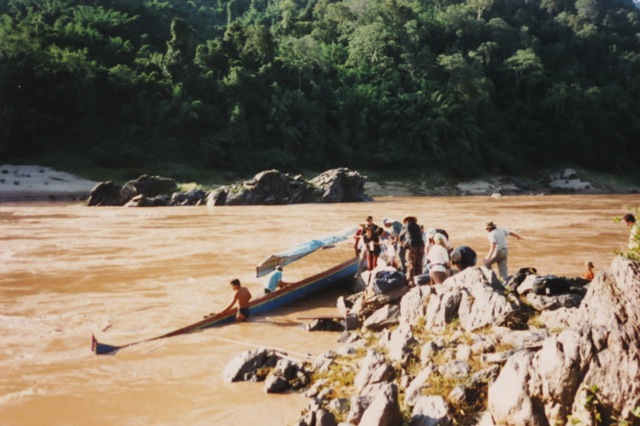 My experience was similar, although I was in the front of the boat, sitting opposite our Laotian guide, Som Pon. When we careered into the rock I leapt across him and grabbed the rock, believing somehow that I could hold the boat against it to stop us being washed away. Som Pon’s fingers were bleeding where they had been caught between the hull and the granite at the moment of impact. Immediately we began to climb out, onto terra-firma. Simultaneously the boat owner began throwing our packs out into the water, to lighten the load. It was quite alarming!

Lisa then delivered her sermon on the rock. One of the group asked “Lisa, this must be a leaders worst nightmare” Her reply? “Shit happens!” We watched the river, where there was nothing to see but swirling brown water. Eventually a passing boat came in to see us. Our Laotian guide, Som Pon bravely set out to find help for his stranded party. Bravely, because he confessed early in the journey that he cannot swim!

Amazingly, less that 45 minutes after coming to grief we were rescued by one longboat and three speedboats from Choka, a few kilometres downstream. Our bags were loaded into the speedboats, ourselves into the longboat. River travel was rapidly losing its novelty.

We arrived at Choka at bath time. Half the village was washing in the river, decorously wearing sarongs as bathrobes. Lisa and Som Pon met with the head man’s wife (the headman was at a celebration nearby) who offered us hospitality. We paid a small hospitality donation for being allowed to sleep in the verandahs of two houses, and 100 kip each for dinner. Before dinner we bathed in the river, wrapped in our saris in the traditional way!

Someone appeared with two chickens, which were dispatched with sound effects, and as dark clamped down we sat on mats in the headman’s house to a meal of chicken soup, sticky rice, chilli paste and bony chicken bits. We ate from communal trays, bowls and pots, seated between curtained off bedspaces and the family members. A grown daughter and her baby played on the floor behind me. The wife watched us carefully to see how we received the food, and more soup and sticky rice was brought out as it was prepared. Stuart, Lisa and I shared, eating with our fingers. When we were nearly finished someone brought out a pineapple rescued from the boat, and it was whisked away and brought back for dessert. A young man, probably a son, oversaw the whole evening, and chatted to guide throughout. The last of the Lao Lao was passed around with much laughter from our hosts (crazy Westerners, don’t they know that stuff makes you blind?) Five of us were chosen to sleep on the floor of the village hut opposite. We set off down the treacherously steep riverbank to relieve ourselves, stumbling down the huge steps and muddy bank. We had almost stopped shaking as we make our way to the floor of the building opposite, hoping to sleep. No chance. In deepest Lao, at a village that according to our guide has never seen tourists, we were bunked down above the village television. Sometime in the middle of the late night Japanese soap opera we drifted off. 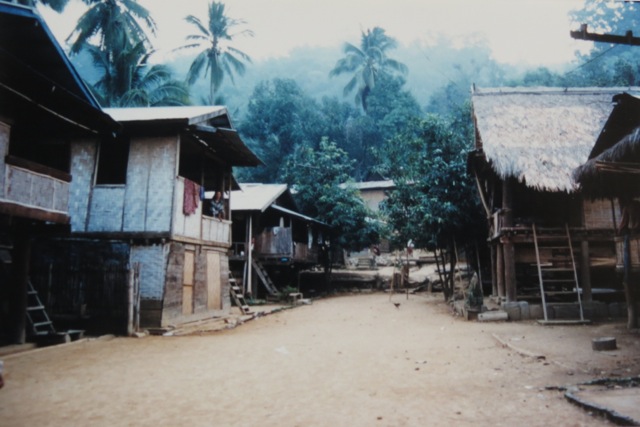 We were up early, before dawn, but not before the roosters. There were still some stars in the sky when S and I walked carefully and quietly between the houses on the way to the river, negotiating the huge uneven steps cut in the bank of the Mekong. Hard to imagine the river 10-20m higher than it is now. We clambered up again, noticing smoke from early cooking fires hearing the Lao Top 40 on a distant ghetto blaster, seeing occasional movement. S stayed out to draw while I slept a little more.

Roosters, first up in the village! Pigs snuffled quietly underneath the houses. 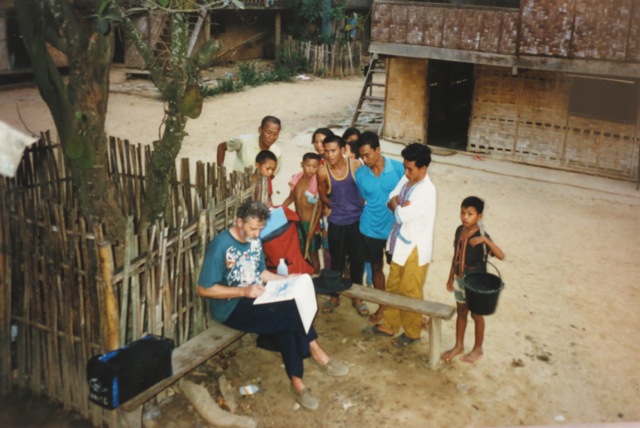 Stuart drawing, the villagers were fascinated

Locals were not used to western art, they were fascinated to see Stuart sketching the village. 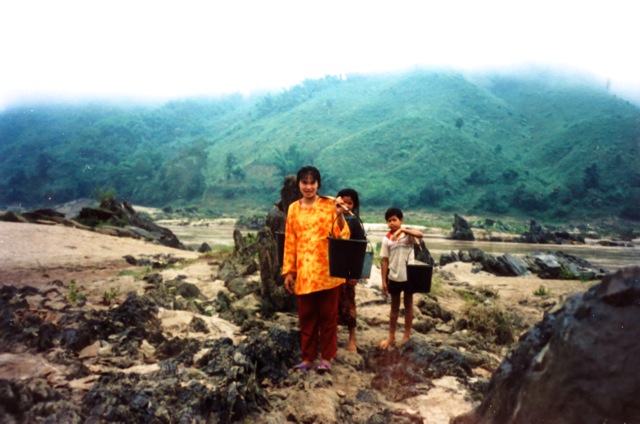 morning job for all, collecting water

We were all down at the river by 6am fascinated by the steady stream of children carrying water, two buckets on a bamboo slat across their shoulders. They must be fit!

morning on the Mekong, we were to travel on speedboats (they are covered) to Pak Beng

For this departure we were treated to a traditional blessing, hoping to avert any further disaster.

Wife of the headman, blessing our boats

Our gear was stowed in the speedboats. The head lady offered a sticky rice blessing to one boat, a second one was sloppily given five rice balls and the third boat remained unblessed! We boarded, four passengers per boat, and were asked to don heavy motorcycle helmets to protect our heads in case we were thrown out onto rocks in a collision. We thought this was funny, since the helmets would certainly sink us if we ended up in the water!

You can see some helmets in the back of one speedboat. Choka was wealthy village, it was unusual to see speedboats at a river village.

racing through mist and whirlpools on a speedboat

We were in the unblessed boat, and led the way through breathtakingly beautiful scenery. Skimming over the surface of the river at 60-80 kph, gazing through our helmets at the mist covered water and steep hilly terrain. The river seemed calmer and the boats stayed on top, not affected by whirlpools and current that swirled around the bends and rocks. It was like travelling through a movie set, and arriving in Pak Beng did not change that impression. Here are Stuart’s sketches of the river and Choka, scroll down to find them.

29 thoughts on “Bangkok to Hanoi: Shipwreck” 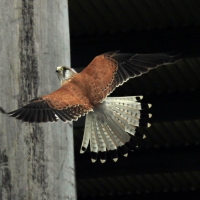