Malabar is a high point at the northern end of the island, attractive to bird watchers who climb up in summer to see the Red-tailed Tropic birds playing in the updrafts. After recovering from our hike over Intermediate Hill and down to Boat Harbour we thought Malabar would be easy. Last year we went up on a sunny day, but this time the weather was closing in. Even so there are wonderful views all over the island.

The climb begins at the northern end of Ned's Beach, through cow paddocks and Sooty Tern nesting territory, then up the scrubby and rocky ridge to the pinnacle at 208 metres. We passed other walkers going in both directions, some scrambling for shelter before the rains, others quite carefree, and a couple of young locals actually running, 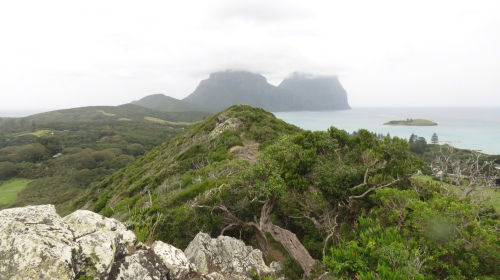 Looking south to the mountains, sheathed in cloud. At the summit Stuart sat down to draw and I tried to photograph tropic birds, but was eventually drawn further north on the precipitous track towards Kims, where the birds were gliding closer to the cliff face. In a graceful ballet they swooped and soared, ever higher, then sailing out to sea, and back around in twos and threes riding the breeze up to the cliff face again. Sooty terns called overhead, other birds glided by, but it was not a time for photos …. this was my best effort.

See those startling long red tail feathers! Soon raindrops were landing on the camera so I climbed back to the summit to meet Stuart, who had also packed up. We scuttled down too, watching our footing on the steep slope, hopped on our bikes and cycled back to the cottage with more promises of no more mountain climbing!

9 thoughts on “View from Malabar”