While Stuart was busy with his first art workshop in Ginny's Shed I went walking. Strong winds had blown most of the cloud away, although occasional storm clouds drifted in to drop some welcome rain. Apparently the island can become very dry over summer, so the residents are glad to have full water tanks now. Only 397 people are permanent residents, and there is a cap of 400 visitors at a time.

I swam in the lagoon this morning, but the wind had whipped up quite a swell, so I just played about for a while. Then I went to the Visitor's Centre where I bought an internet access package, and was reminded of how very very slow it is here. There is no mobile phone reception on the Island, a blessing for many guests! Lord Howe is over 700 kms north-east of Sydney, kind-of halfway between Australia and New Zealand, but actually part of the state of NSW. Norfolk Island nearby is completely independent, but very commercial. Later I relaxed and read a Maeve Binchy novel from the bookshelf here in cottage, saving my energy for an afternoon bike ride. I love how her endings are so satisfying!

We hired our bikes and picked up a few more supplies from the Co-Op, plus tofu from Joy's Shop, then headed out towards the airport, a fairly level ride until we become stronger! This Sacred Kingfisher was hunting on the green grass of the airport, and sat peacefully on the fence while I got off the bike and took his photo. The wind was incredibly strong and variable around the airstrip, with the three windsocks all blown in different directions. How challenging is that?

Blinky Beach is a nesting site for Sooty Terns so we were soon transfixed! A myriad of adults and chicks nestled in the silvery dune grasses, their soft cries drifting in the air, just as the adults seemed to float on the strong evening breeze, flying in from the sea with food for the young. 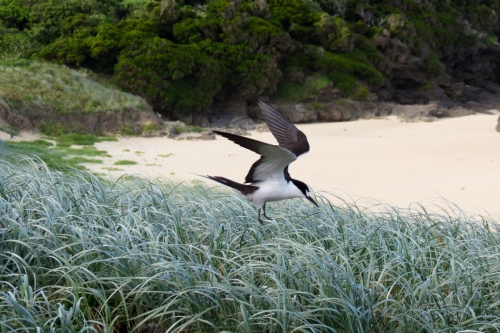 The brilliant man-made plastic colours of wind sock and bunting added to the surreal quality of the scene on the dunes. We are here for two weeks …. plenty more afternoons to watch the feeding displays at Blinky Beach.

Sooty Terns lay one egg in a scrape on the ground, which hatches in 28 days, then they care for the chick until it fully fledged at 70 days. During this time the birds are either at sea snatching fish, crustaceans and squid from the surface of the ocean, or on land resting and feeding their chicks.

Here is young chick, almost hidden by the dune grasses, waiting for its parent to return from sea. The wind was so forceful it almost blew us over, so we stayed on the boardwalk (buried under the sand, see below) without venturing onto the beach. We could see at least a dozen chicks from our position, and possibly hundreds of adults, quite an astonishing sight!

There were wild winds and rain on and off all night, but calmer weather is forecast in a few days.