This was my third visit to Gulaga, the Great Mother. Twelve years ago, while we were camping with aboriginal elder Auntie Ann Thomas, a small group of us walked up to the women’s area with her blessing. Like many indigenous people Aunty Ann’s health was not good so she was unable to accompany us that day. I carried a small bottle with me, and some brandy, to make an essence at the site. As I walked communing with the mountain and the nature spirits around me, I collected water at a little creek that rushed down the mountainside. When nearing the sacred place I asked permission to enter, went in and promptly met the spiritual guardians, who gave me quite a fright. A row of women stood in front of me by the Birthing Rock; they were naked except for a red string around their bellies, arms crossed on their chests, and a fierce expression on their faces. I was so alarmed I almost dropped the bottle of water I was holding, but I heard a voice say “Leave it here!” so I put the bottle on the rock and stepped away. You can read the whole story here, but in short when I returned to collect the bottle I realised they had given me a very powerful gift. Since then many women have benefited from the energy of Mother Gulaga, babies have been conceived and born, women and girls have found their hormonal passages eased, women’s issues of loss and grief have been comforted, and so on. 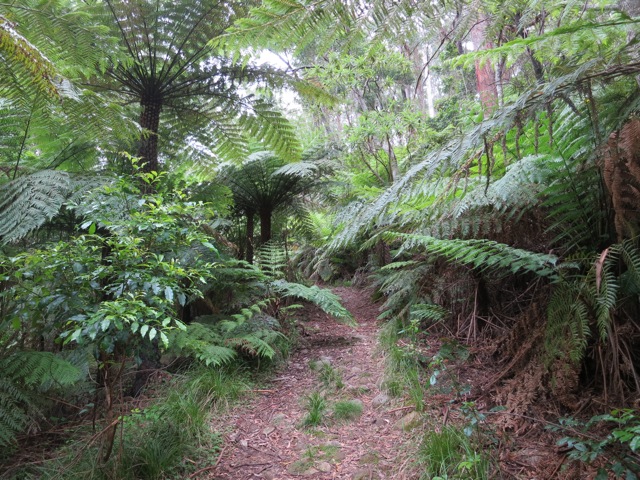 Years later I was speaking with Tanmaya who lives at the base of the mountain, and who also makes vibrational essences. Tanmaya told me has also seen the the women guardians, exactly as I described them. Apparently the male guardians are far more frightening, for when he first moved to live there Tanmaya met them on the lower slopes of the mountain. They were fully armed and so threatening that he fell onto his face on the ground before them, and carefully explained who he was, and that he was no threat to Gulaga. 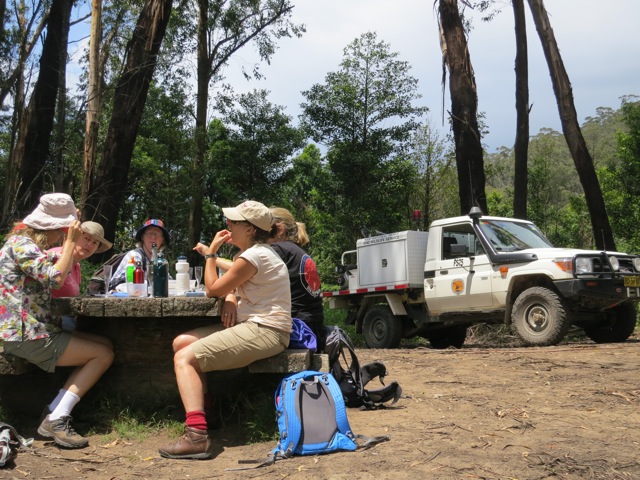 resting at the saddle

So now you understand that when my good friend wanted me to accompany her on the walk to the women’s area on Gulaga I had to go, to take them safely with proper respect for the great mountain and her fierce protectors. As we walked along in the cool morning air, stopping frequently to catch our breath and rest, the mountain gradually took us into her bosom. Other walkers raced past, rushing up to the summit and down again, someone snapped the fronds of the tree ferns growing over the path, wrenching my heart each time I saw another broken frond. But we eventually came to the saddle, where there is a picnic table and a bush toilet. Here we met a National Parks ranger who had driven up a different way to do maintenance such as clearing fallen trees from the track. We sat to eat, drink and rest.

By then I had been ‘talking’ to the women guardians who showed me that they would once again give me the healing women’s essence, and I had collected water in a tiny runnel that crossed the path. So I had a little essence making bottle ready. Before entering the site some of us tied red bands around our head, as a sign of respect for the mountain. I took a pair of clap sticks from my back pack, and tapped them rhythmically as we walked in, announcing our arrival to all the spiritual beings. Even so I silently honoured the spirits and guardians and asked permission for all of us to enter. Then I left the bottle on the birthing rock, and went after the others who had spread out through the site in awe.

Even gazing at the huge rounded shapes of these granite tors will tell you a story, look for themes related to women lives, birth, pregnancy, and to animals themes of snake, whale and so on. On this visit I did not ‘see’ any of the spirit beings, but I felt we were all welcomed. Peace and love flowed around us in the mountain air.

Human problems seem small in such a setting, Mother Gulaga wraps us in her cloak, we enter the vastness of her world, the eons of time that have passed since she was born as a fiery volcano one hundred million years ago. At that time the great Rainbow Serpent flowed down her slopes on his path of constructing the land and her people. 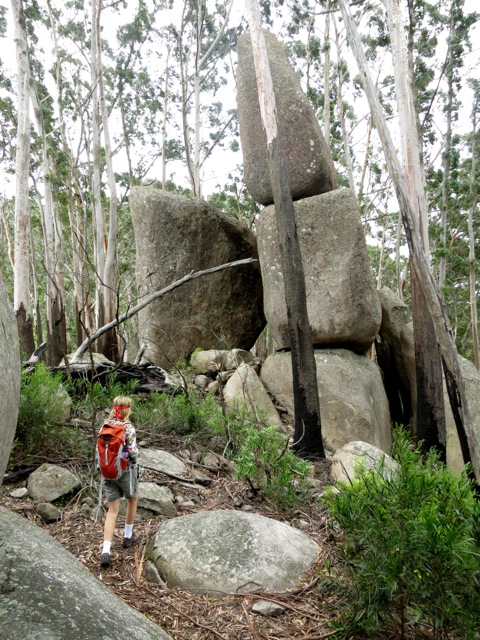 All too soon we had to leave for the slow trek down, during which I suddenly noticed all the small flowers and ferns along the trail. Having completed the essence making and the journey into the sacred site my focus shifted to all the beauty of life around us. By the path we rested against a forest giant who was full of light, we sat on rocks, gazed at tiny plants, listened to the birds, we totally absorbed all the gifts of the Great Mother. 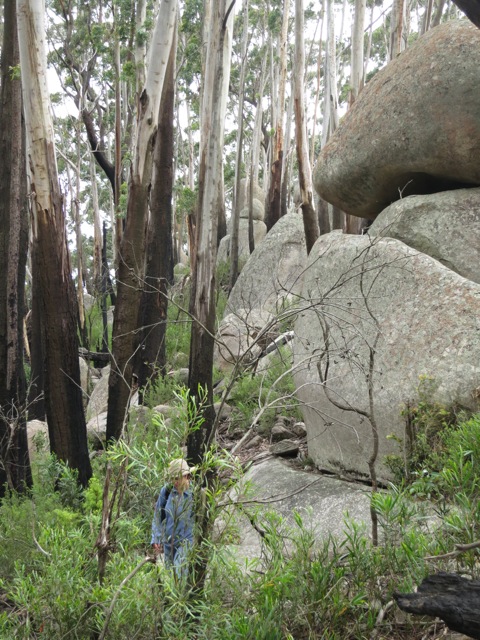 At the base of Gulaga we looked out to one of her sons, Najenuga, who stands not far away, keeping his mother company through time. Her other son Barranguba went out to sea, where he stands now as Montague Island, off the coast of Narooma. You can read their story told by a local Koori woman Cheryl Davison.

Najenuga, one of Gulaga’s sons, who stays hear her feet

The whole trek took six hours, but we could have spent longer, so allow plenty of time when you go! Maybe tomorrow I will share the ferns and flowers with you too.

Like some more? While researching for this post I found a lovely story by Olga Christine, about her visit to Gulaga with aboriginal elder Max Harrison earlier this year.

14 thoughts on “Walking on Gulaga”